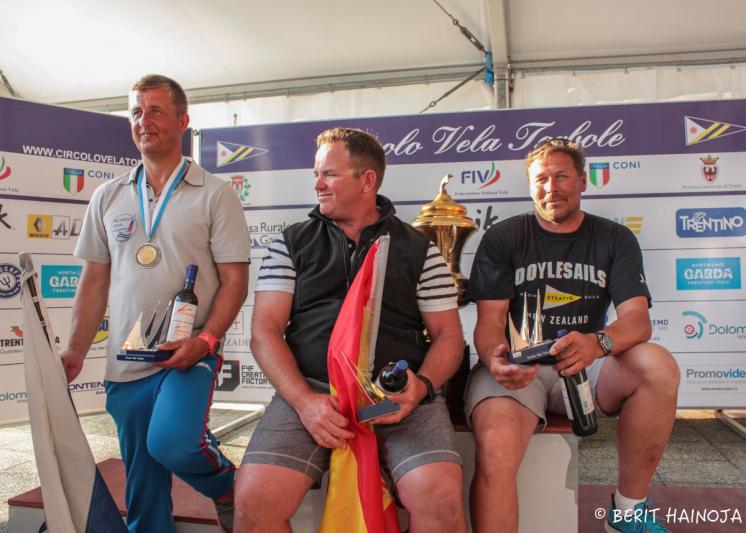 Whatever the outcome of the final races at the Finn World Masters in Torbole, everyone was a winner with a spectacular final day of sailing. Rafael Trujillo (ESP) won his first Masters title after a great comeback in the medal race to take the win from defending champion Vladimir Krutskikh (RUS) and six times winner Michael Maier (CZE).

Earlier in the day the final races were held for the rest of the sailors. The southerly Ora kicked in good and strong just in time for a 13.00 start with four races started within an hour. Race wins went to Uli Breuer (GER), Christoph Christen (SUI), Aleksandr Kulyukin (RUS) and André Budzien (GER), but more importantly the medals for most of the age categories were determined. The medal race itself was as dramatic as it was scenic. Sailed up against Garda's steep walls, the lead changed three times before Trujillo crossed the finish line ahead to take the overall title and the Masters title.

Up on the podium, Trujillo thanked everyone, dedicated his win to the memory of one of his heroes, a Spanish Finn Master sailor who passed away recently. He also thanks all the sponsors and the club for putting on such a great event.

Rafael Trujillo said of his win, “I am very happy I won today as I did quite a lot of things wrong. I had a bad time at the start and went to the right and tacked too early and made all the wrong shifts. At the top mark I didn't think I could make it, but I passed two boats downwind and was back in contention. On the second upwind I was coming closer to Vladimir and Michael. Then I got a little lucky with more pressure on the left and right side of the course and nothing in the middle and Michael was in the middle. He was doing a amazing medal race but he slowed up on the last downwind. Normally I have been winning in the upwind but this is one of the few races that I won on the downwind.”

Vladimir Krutskikh also passed Maier on the final downwind to take second, with Maier very close behind in third.

“It was not what I was expecting. I expected a good start, using my experience, and be easy and not have this kind of thrilling medal race until the last moment. It was too painful for me. Really bad medal race. I hope that my athlete does not see it. It not good for me.” Trujillo joked.

Victory for Trujillo is a milestone for the class – the first time an Olympic medalist has won the title. He said he would be back. “I don't know if I can come next year but the year after I know Balis will be very good venue and the most important thing is I enjoyed being here a lot. The group of sailors in the Finn masters are very nice and I really enjoyed my time here. I enjoy coaching the Finn but I still enjoy sailing it as well.”

Everyone is now returning home, sad that the event is over for another year but buoyed by the knowledge that in one year's time, the Finn World Masters fleet will meet again, in BARBADOS.

Departing for all corners of the world, the Finn Masters President, Andy Denison (GBR) summed up the feeling of many here when he ended the event with the words, “And remember to live life well, with memories, not dreams.” The Finn World Masters will take plenty of memories from Torbole.