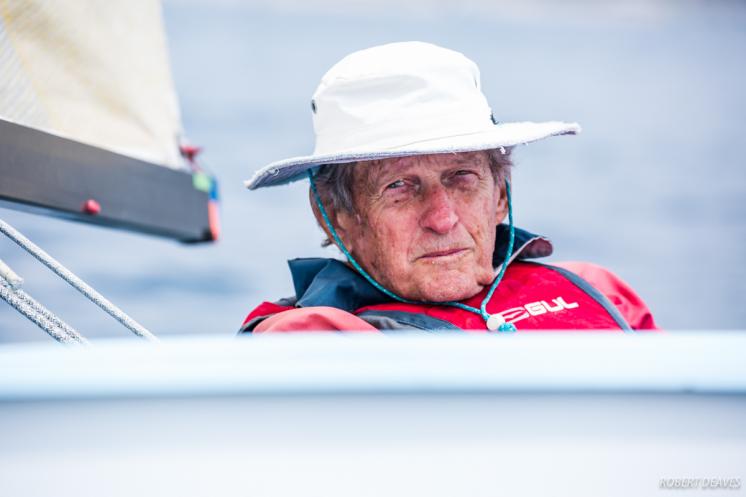 For the second day in a row, lack of wind precluded any racing taking place at the 2018 Finn World Masters at El Balís. The day started cloudy and after a light sea breeze became established early afternoon, hopes were raised, but it did not develope as expected and racing was abandoned for the day before 17.00.

As a result the schedule has been changed with Wednesday’s racing being brought forward to 12.00, and the Annual Masters Meeting postponed until Thursday. Forecasts indicate that Wednesday could bring a more solid sea breeze. Rain and thunderstorms in the interior continue to disrupt the normal thermal generation that produces the sea breeze here.

The day ended with a champagne and strawberry party on the beach, with the daily prizes by Regatta and North Sails again being assigned by a bow number raffle, and beach games, involving beer and champagne. The men’s race was won by Mark Perrow, from New Zealand, while the women’s race was won by Tina Sperl, from Austria, the only women entry in the Finn World Masters.

Despite the lack of racing, the morale of the fleet remains high with everyone enjoying the fantastic hospitality and sunshine. But enough is enough and it is time to go racing. Everyone is crossing fingers and toes for Wednesday. Four races are required to make a valid series and with a maximum of three races allowed each day, two racing days are needed.

The oldest Finn sailor here is Gus Miller, 83, from the USA. Gus is a class Legend in more ways than one, former Vice President, the creator of the Finn Class clinics, he was also a top level sailor in his time, notably winning a Gold Cup race at the age of 56.

He was interviewed on Day 1 while waiting for the wind.

“People come up to me that I have not met before and I will introduce myself to them and they say, ‘Oh yes I have read about you, or heard about you or I know about you’, and I wonder who is this guy that they heard about. In a way it’s a testament to the amount of energy I put into the class over many years. Gerardo Seeliger, who is also here, was the Treasurer of the class when Jacques Rogge was the President and I was the Vice President."

“We started a programme around the world to bring lots of say, third world countries, or countries that did not have programmes, into the class, and through that I got to meet an awful lot of people. Being inherently a teacher my interest was in human potential, what could bring them up, and in going after that you get to know people very well. So that approach to everyone, where I was really interested in them kind of made a character for myself that was really interested in other people and seeing the human part of it. I think that is what the legend is.”

“When I was teaching a new group I would say there is only one guy going to the Olympics, there are 12 of you that are going to try, so the journey to there is the important thing. All of you are going to come out with a great deal of growth, one goes but the best are all a part of it.”

He got very close to qualifying for the 1976 Olympics, but it turned out to be the start of a long coaching career.

“I didn’t win our trials, but went as he tune up boat. Then I was asked to coach a Filipino, who had never sailed a Finn, and that really changed my view. And that fall I was asked to do a clinic with at the Naval Academy.”

"The next year the Canadians asked me to do a clinic with Paul Elvstrøm. I went to the pre-Olympics as the acting team leader for the US and there began to get the idea of the International Finn Association having these clinics, and in 1979 we began. We were going to do one before the 1980 Olympics, but the boycott killed that, so 1984 became the first opportunity to do that. And that was the start of the whole thing.”

On continuing to sail the Finn, he said, “I’m lucky that at my age I can still get in the boat and sail it. When I step into it I step into another world. It’s like Pablo Casals: when he sat at a chair with the cello, he became 30 years old again. When I get into the boat, suddenly the years fall away, concentration comes back, the focus comes back, and my body feels younger.”

“It’s like driving the finest little car… like having a Maserati, the best sports car you can think of. This thing is so sensitive and so subtle, it’s marvellous to get in it. There are very few boats I’ve ever sailed that have the sensitivity that this thing has.”

“This boat is so sophisticated and subtle that no one can ever master it and when you are racing it is not against the others guys so much as against yourself. If you can master the boat as well as you can, then you will do well. If you are having trouble it has nothing to do with the other guys, but the other guys will help you.”

“Because the guys work together and push each other so hard, the level goes very high. The guys are interested in pushing each other up. They learn that when they are young in the boat and they carry it into this. So the guys here [at the Masters] are just as serious as the professionals going after the Olympics.”

"It’s extraordinary to see a marina like this able to have 350 Finns come and have a good regatta. That says a lot for the marina and the organization here.”

Racing at El Balís is scheduled to restart at 12.00 Wednesday.

While hopes are high that the weather will finally return to normal, just in case...please send wind.

Extensive galleries can be found at: www.flickr.com/finnclassphotos

Photos free for editorial use and sharing by sailors.

Notice Board and Results: http://fwm2018.cnelbalis.com/en/default/races/race